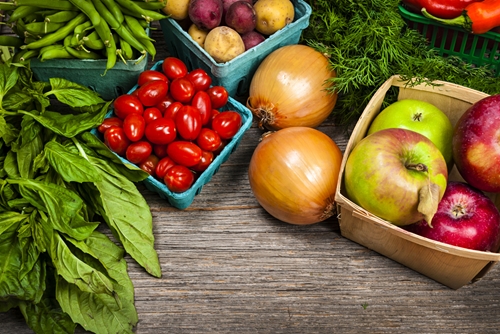 Tips for Helping You Cut Down on Your Food Waste

Each year, American families throw away about $165 billion of food, according to a study by the National Resources Defense Council. Not only does this cost the average family approximately $2,200 annually, according to the Natural Resources Defense Council, but it's also detrimental to the planet. There are plenty of reasons that people may throw food away. They might not have gotten the chance to finish their food before it went bad or got stale, or they may have over-purchased because a bulk sale was such a great deal. Whatever the reason, though, it's clear that we need to begin making an effort to cut down on food waste.

Investing in the FoodSaver® FM1510 Fresh Food Preservation System is a great way to start cutting down on your family's food waste. Vacuum sealing your produce, pantry items and meat allows you to keep food fresh longer without it spoiling. Here are a few steps you can take to further cut down on waste and save money:

Plan Ahead
Before you go shopping, take an inventory of what you need and write it down. This will prevent you from buying too much food. If you do over-purchase, store everything properly so it won't spoil before you're able to enjoy it. Extra dry goods, deli meats, fruits and vegetables can be vacuum sealed in FoodSaver® Fresh Containers. This ensures food stays fresh up to two times longer in the refrigerator and pantry than it would in the original, flimsy store packaging.

Store Everything Wisely
To help preserve the freshness of your produce, make sure you're keeping it in the right place in your kitchen so you don't speed up the ripening process. Do not pre-wash fruits before putting them in the refrigerator unless you'll be storing them in FoodSaver® Fresh Containers, because this can cause them to deteriorate quickly. Don't store fruits and vegetables in the same crisper drawers in your refrigerator because some vegetables emit gas that can cause fruits to spoil quickly. Produce like squash, citrus, melons or potatoes should be stored at room temperature instead of in the refrigerator. The counter is best, though, as the top of the fridge tends to get too warm.

Make Smaller Portions
If you have kids who don't usually finish their food, simply start serving less. We've become accustomed as a culture to try to "clean our plates," but that typically just causes us to make too much food. A great way to ensure you don't overeat is to pack up leftovers for the next day before even sitting down to eat dinner, leaving yourself smaller portions to serve. This prevents you from having to throw away food that would otherwise end up left over on your plate. You'll also save money by bringing leftovers to school or work instead of having to buy a meal each day.

"Write down anything you throw away."

Keep Track of What You Toss
Even the most vigilant consumer will throw something away at one point or another. An effective way to limit this as much as possible, though, is to track what you throw in the garbage or compost. This way, you'll be able to realize patterns that may lead you to throwing things away. For example, if you're always tossing bags of lettuce it's a safe bet that you should begin buying smaller packages. The more you know about your consuming habits, the more you can tailor them and prevent food waste.

Reuse
We all know the phrase reduce, reuse, recycle. If you're already cutting down on the food purchases you make, your next step should be to reuse what you can. Composting is a great way to ensure your food isn't going into landfills - and allows you to nourish your own garden - but you can even use pieces of produce that you would normally toss. For example, if you let fruit sit in the fridge for too long and it gets mushy, you can use it in smoothies or baked goods, and you can use the greens on the tops of carrots or radishes in your mixed greens. Change up your salads a bit!